Zimbabwe recorded a primary surplus of $29 million in October, breaking a streak of huge deficits for much of the year, Finance Minister Mthuli Ncube said on Wednesday.

The budget deficit is forecast to close the year at $2.8 billion, nearly 12% of GDP, and is a major source of volatility in the economy.

“In the month of October, we have a primary surplus of $29 million. This is the first time this has happened in the longest while. Of course, we have interest to pay from previous debt, that then pushes us into a small negative, but the budget is as good as balanced,” Ncube told journalists at a post-budget media briefing.

“We are walking the talk when it comes to fiscal discipline, fiscal consolidation and balancing the budget because that is a key driver of the value of a currency.”

He said government had managed to arrest money supply growth since the appointment of the new Cabinet in September. 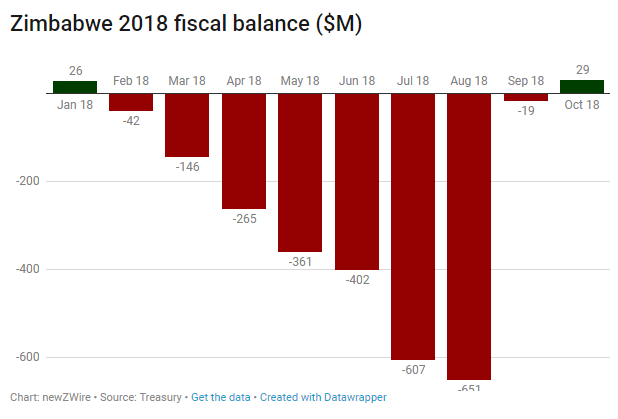 “If you look at the growth in money supply in the last two months since we came into office as the new government, that has slowed down to virtually zero. You can check the banks’ balance sheets, they will show you that it’s virtually zero. That’s important for retaining the value and stability of a currency,” he said.

The 2019 budget Ncube presented last Thursday proposes to spend $8.16 billion, the same as this year’s expenditure. Among other measures, the budget seeks to cap government borrowing, cut command agriculture spending – which exceeded $1.1 billion this year – while increasing taxation on fuel and cigarettes. Duty will be charged in foreign currency on selected imports, including cars. The forex tax proposal has drawn perhaps the loudest criticism, but Ncube is not yielding.

“One thing we wanted to target was excessive demand for luxury goods. Our approach there was not to increase tariffs on them – we didn’t increase taxes and import duties – but said perhaps one way to tackle this is to make sure you meet the import duties in the currency in which you acquired the goods in the first place,” Ncube said.

Zimbabwe has spent more than $4 billion on vehicle imports since dollarisation in 2009. 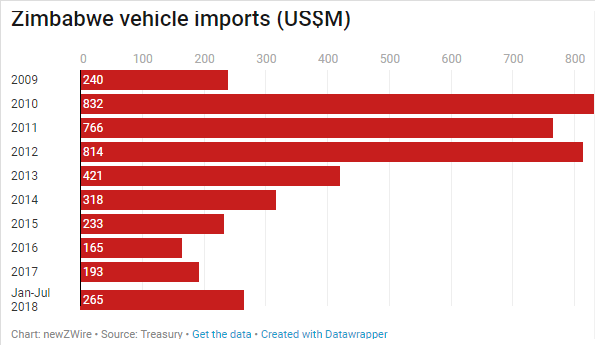 Ncube expects the cost containment measures in the budget, which include turning over agriculture spending to banks and industrial corporations directly dependent on farm produce, to complement a 2% tax on electronic payments he introduced in October, towards narrowing the budget deficit.

Addressing criticism that he had not tackled Zimbabwe’s currency crisis, Ncube said he was targeting the twin fiscal and current account deficits as a first step towards currency reforms.

“We saw that blip or jump in inflation in October, but our expectation is that inflation will fall on a month-on-month basis, going forward because that jump was one-off and now we had the adjustment and now progress once we’ve done that structural adjustment upwards in the trajectory, so it should drop in the month of November, December going forward. So, again, we won’t have any pressure from that inflation differential going forward.”

Ncube said the move to charge import duty in forex on some goods is expected to push import demand down.

“Such demand is what is driving the current account deficit. All of this, put together, will go a long way in stabilising the currency and set the stage for a roadmap towards currency reform,” the finance minister said.

“So everything we’re doing in the budget is linked to the entire currency reform agenda. Because you have to do it in steps, you can only do currency reforms when your fundamentals are strong, when your budget deficit is under control. That’s the first order of business.”

Huya uzowona: Stella Chiweshe has stepped off the stage, but the mbira shall still...