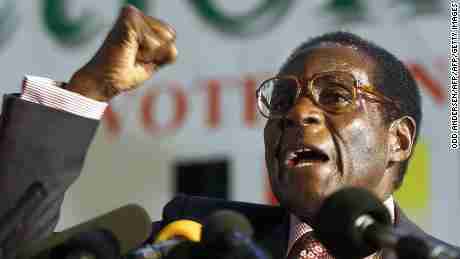 Robert Mugabe, who led Zimbabwe for 37 years, has died at age 95, President Emmerson Mnagagwa has confirmed.

Mugabe has been under treatment in Singapore since April.

“It is with the utmost sadness that I announce the passing on of Zimbabwe’s founding father and former President, Cde Robert Mugabe,” Mnangagwa said in a statement.

“Cde Mugabe was an icon of liberation, a pan-Africanist who dedicated his life to the emancipation and empowerment of his people. His contribution to the history of our nation and continent will never be forgotten. May his soul rest in eternal peace.”

Signs of Mugabe’s deteriorating health came in early August when his Mnangagwa released a statement saying doctors wanted to keep Mugabe under observation for longer than usual.

“Unlike in the past when the former president would require just about a month for this, his physicians this time around determined that he be kept under observation for much longer, from early April this year when he left for his latest routine check-up,” Mnangagwa said then.

After ruling for 37 years, Mugabe was ousted in a military coup in November 2017, a culmination of a fierce battle inside ZANU-PF for power.

He leaves a mixed legacy; his is revered in Zimbabwe for being one of the leaders of the liberation struggle that ended white minority rule, and is held in high esteem across Africa for his tough push-back against Western imperialism.

However, that legacy was tainted by years of misrule, during which he presided over economic collapse, a genocide and political repression.

A report recently said Mugabe had indicated that he does not want to be buried at the Heroes Acre, where he himself presided over the funerals of many liberation war heroes and political allies.

Mugabe was born at Kutama in 1924. He joined the liberation struggle in 1960, having returned to Zimbabwe from Ghana where he had been a teacher.

In 1964, he was jailed for 10 years by the Rhodesian regime, a stint during which he was barred from attending the funeral of his son, Nhamo.

The death of Herbert Chitepo in a 1975 assassination allowed Mugabe to consolidate power in the liberation movement, which he essentially never lost until the coup of 2017.

Reviving Zimbabwe’s beef export in a Foot and Mouth Disease environment: time for a...

Govt to hand Petrotrade to Kuwait’s IPG, defying previous board opposition to deal

EXPLAINER | How the RBZ’s latest forex trading system is supposed to work, if...