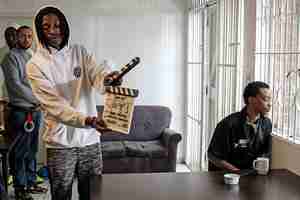 Everything about “Cook Off” was a long shot.

The film’s plot, for one. It told a story of near-impossible odds, following a single mother and amateur chef as she duked it out with an ensemble of professionals to try to win a Zimbabwean reality TV cooking competition called “Battle of the Chefs.”

“It’s just so much harder than I imagined,” confesses Anesu to a fellow competitor after nearly being eliminated from the show. “I just feel like I’m way, way out of my depth.”

But if the fictional Anesu was out of her depth, the film’s crew was even more so. The total budget for “Cook Off,” a romantic comedy, was about as much as a decent used car. Actors sometimes missed call times because they got caught in the police tear gas being used to break up anti-government protests in Zimbabwe’s capital in the dying days of Robert Mugabe’s 37-year rule.

Power cuts would arrive in the middle of filming, and to save money, several crew members shared the director’s small house, which also doubled as part of the set.

So when Netflix announced earlier this month that it had licensed the streaming rights to the 2017 film – the first time in the streaming service’s history that it had acquired a feature film made in Zimbabwe – it felt to the cast and crew like the movie’s plot had jumped the screen into their real lives.

“There are so many barriers holding us back, and so many odds against us as African actors and filmmakers,” says Tendaiishe Chitima, who plays Anesu. “But at that moment, it felt like we had broken through them all.”

Among the biggest barriers in Zimbabwe, of course, is money. Feature films made in the country are often donor-financed, with the stipulation that they tackle a pressing social issue like HIV, homelessness, or teen pregnancy.

“We often have this super-serious heavy content coming out of Zimbabwe,” says “Cook Off” director Tomas Brickhill. “We really wanted to do a feel-good romantic comedy to say, our lives look like this, too. We should be allowed to fall in love on screen, too.”

As a director of the real-life “Battle of the Chefs” competition, Brickhill knew the ins and outs of the contest well. So it wasn’t much of a leap for him to fictionalize his reality show experience for the big screen.

What was far tougher was putting together a feature-length film with an initial cash budget of $8,000, supplemented by deals to offset the costs of gear and film set. “For everyone who participated, it was a leap of faith,” he says.

The actors were told they’d only be paid if the film made money. And when it came time to screen the final cut in December 2017, the crew chose the roof of a hotel in the capital Harare, not because it was a hip open-air venue, but because they couldn’t afford to rent out a cinema.

But even before Netflix bought “Cook Off,” which will go live on the streaming service June 1, the film’s trajectory was, well, cinematic. In the weeks between when filming wrapped and that first screening in Harare, Zimbabwe’s only leader since independence, Mugabe, was muscled out of office by his former vice president in a coup.

And although his replacement was his former right-hand man, Zimbabweans were jubilant at the prospect of a new dawn for their country.

“There was a big push from the new government to say, ‘We want to be more open; we want to allow more freedom of expression,’ and our film got caught up in that momentum,” Chitima says.

“Obviously a few years later we can see not much has changed for Zimbabwe, but at that moment, it felt like a fresh start.”

And the film soon had momentum of its own, screening at a dozen international film festivals and garnering fans from Los Angeles to Rotterdam in the Netherlands to Durban, South Africa.

A film that let Zimbabweans see themselves – their tin-roofed neighborhoods, their skeptical mothers, plates stacked with meat and pillowy clouds of sadza – on the big screen, he says.

“But at the same time, we wanted it to be something the rest of the world could identify with, too.”

And it worked, he says. Audiences around the world were sucked into the love story, the reality show drama, and most of all, the story of an underdog who made it big in an improbable way.