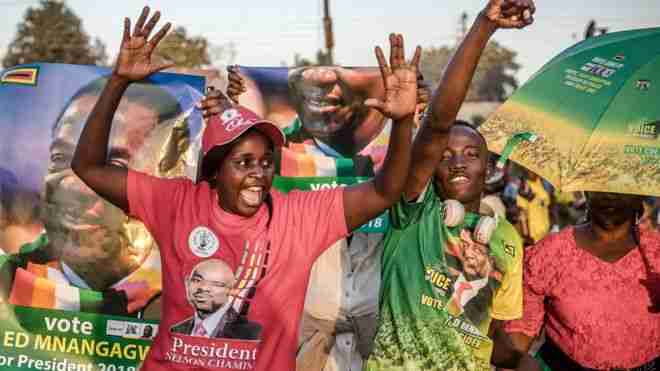 One hot afternoon at the University of Zimbabwe, we were in a tutorial for a course called Development Administration.

The technical aspects of the course combined with the weather made the mood rather snoozy until one of our classmates suddenly said: “Let me catapult this discussion to a higher level”.

We all burst out in laughter. Not only at the oddity of the statement but because perhaps he did indeed have a ‘higher’ angle to whatever technical questions about rural development we were discussing.

It turned out that he didn’t quite change the mood. Though every time we meet with former classmates who were present on that day, we sometimes have hearty laughs about the incident.

I have given this anecdotal example mainly because I would like to discuss the nature, intent and assumed levels of political discourse in Zimbabwe. I however do not intend to claim that I can ‘catapult it’ to any other levels.

What is however apparent is that there are a number of perspectives of how political debate is being shaped in contemporary Zimbabwe.

These are based mainly on personal political persuasions which also inform general social media banter.  In rare instances, they are based on either factual or academic analysis but again even these angles cannot escape some forms of bias. Even if they are purveyed via mainstream media outlets which also remain politically polarised.

A general overview of how our political discourse is now being shaped points to at least three angles. These are namely the ‘emotional or populist’ angle, the ‘proof of loyalty’ angle and the ‘default ideological’ angle.

I will start by analysing the most ubiquitous one which is that of the emotional/populist approach to debates.  Over the last twenty years, our national politics has been binary mainly due to the two main antagonistic political parties in the form of Zanu PF and the mainstream opposition MDCs.

In this, our political culture has become characterised by a strident form of populism either side of the political divide.  It includes populist accusations and counter accusations by either party as to their true character and meaning in our national politics.

Moreover, due to the occurrence of disputed elections and high levels of politically motivated violence in the majority of electoral campaigns’ since 2000, many Zimbabweans who experienced the latter are extremely emotional about their political opinions and those they support.

These groups will never accept ZANU PF as a ruling party in their debates and continue to assume that, at some point, they will eventually come to power.

On the other hand, neither will ardent ZANU PF supporters who either have benefitted from the radical land reform programme (both urban and rural) or fought in the liberation struggle accept opposition rule.

My side, or nothing

This brings us to the second element of our discourse angles, which is closely linked to the first. This related to debate as proof of loyalty.

While this is not preferable in our context, it regrettably remains somewhat understandable. This is how we sort of are. For now. It’s a combination of stubborn loyalty and in part semi-religious fervor that shapes the discourse in this particular direction. This includes assumptions of self-righteousness in our politics, whichever way you want to look at it.

The battle to be best neoliberal

The third strand of political debate in Zimbabwe is the default ideological one.

Whatever polarises our political debate, whichever political opinion that many people hold, there is always a default acceptance of neoliberalism as some sort of shared panacea to our country’s problems.

I personally am not a neoliberal ideologue, but the dominance of materialism and assumptions of the free market or private capital as being a sign of political progress in our political debates is something that cannot be wished away.

This means that there are no fundamental disagreements in mainstream political discourse. It is mainly a question of who is personally preferably in power, and not necessarily what they can change from an ideological viewpoint.

So we are at a place where there is quite literally limited counter-hegemonic debate mainly because we have highly personalised what we consider political struggles and even what can be considered political progress.

As a final and relatively abstract point, we may need to enquire how contemporary political debate in Zimbabwe remains encapsulated in relatively egocentric narratives, that it rarely transcends the immediate and the material. It is almost as though it were being done for an external gallery/audience before it is about the people of Zimbabwe.

Biti conviction: Does he keep his seat in Parliament?