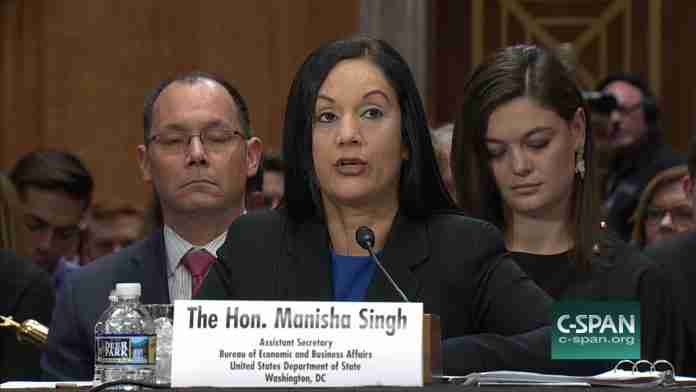 The United States will not lift sanctions against Zimbabwe until the Government of President Emmerson Mnangagwa “changes its ways,” a senior U.S. economic official has said.

Manisha Singh, the U.S. Assistant Secretary of State for Economic and Business Affairs, told a House of Representatives hearing on Thursday that there will be no change to the US sanctions regime on Zimbabwe until there were “fundamental reforms” in the country. Mnangagwa is among 141 individuals and entities that are under U.S. sanctions.

“Our pressure on Zimbabwe remains in place. We are trying to use this pressure to leverage political and economic reforms, human rights observations,” Singh said.

Zimbabwe has been under US sanctions since 2001, when the Zimbabwe Democracy and Economic Recovery Act (ZIDERA) became law. The US followed this up in 2003 with its “targeted sanctions program” that sanctioned individuals and dozens of companies associated with the Zimbabwe Government.

On July 25 this year, days ahead of the election, the US Congress and Senate passed the amended ZIDERA, which extended measures against Zimbabwe. The new amended law places a broad range of conditions on Zimbabwe, among them political and economic reforms and compensation for displaced white farmers.

Zimbabwe has been working the diplomatic corridors to convince America to lift sanctions, which work against Harare’s plans to secure debt relief and new financial support. But Singh’s comments suggest this is far from happening.

In the hearing, Karen Bass, a Democrat from California who observed elections in Zimbabwe, asked Singh how the US government was responding to overtures from Zimbabwe to reengage.

Bass said Zimbabwe was “trying to reach out to us now and I want to know where we are with that.”

Singh responded: “This pressure remains. We want to see fundamental changes in Zimbabwe and only then will we resume normal relations with them.”

Bass then said “considering they want to move forward in that direction, we have a lot of leverage right now, and we need to figure out how to step that up as well”.

To this, Singh reacted: “We are always open to conversations. We are open to a demonstration from the government that it is changing its ways, that it is observing human rights.”

Earlier in the week, the joint American election observer mission of the International Republican Institute (IRI) and the National Democratic Institute (NDI) released a statement saying that while there had been some notable improvements in the 2018 elections, “they were insufficient to establish strong confidence among political competitors and Zimbabwe’s divided populace”.

The Constitutional Court dismissed a petition by opposition leader Nelson Chamisa against the result. However, the US observers say the period in which results can be challenged was too short to gather evidence.

“The ZIEOM was concerned that the seven-day period provided by the legal framework for challengers to collect evidence might restrict the ability to prepare petitions adequately,” the group said, urging wider electoral reforms to increase public confidence in elections.

Why you are powerless: ZESA’s announces tough 12-hour load shedding due to Hwange, Kariba...