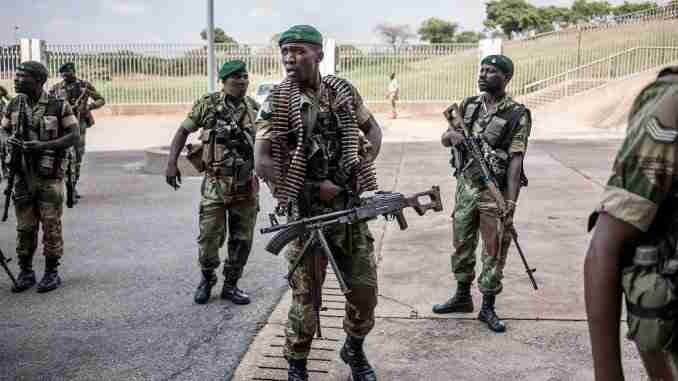 Zimbabwe is to send 304 soldiers to train Mozambican forces, as part of a regional military push to deal with insurgents in Cabo Delgado province, Defence Minister Oppah Muchinguri said Thursday.

No Zimbabwean combat troops will be sent to join the SADC Standby Force yet, but the military is sending 303 instructors and a specialist officer to train infantry brigades of the Mozambican army.

“While other countries have to deploy combat troops, Zimbabwe will assist in the training of Mozambique armed forces to enhance their capacity to compabt terrorism,” Muchinguri told reporters.

The Zimbabwean contingent will leave for Mozambique once a Status of Force Agreement is signed. The agreement is an authorisation by Mozambique allowing the deployment of foreign troops. Parliament will be informed of the deployment, Muchinguri said.

“This issue is no doubt of great importance to Zimbabwe, considering our proximity to and warm relations with Mozambique. It is critical to the peace, security and stability of the entire region,” she said.

This is the first time that Zimbabwe is part of a major military deployment since its intervention in the DRC in August 1998.

SADC’s military experts earlier this year recommended sending around 3,000 soldiers to Cabo Delgado. The recommendation followed the deployment of a technical team, which included Zimbabweans, by the region to assess Mozambique’s needs.

The majority of the SADC military would consist of 1,860 elements from three light infantry battalions, followed by 140 elements from two special forces units and 120 from a communications team. The sectors of military engineering and logistics units will be composed of 100 staff, each, with the remaining areas being responsible for the other elements.

On July 9, Rwanda announced it was sending 1000 soldiers and police officers to Cabo Delgado. Botswana has sent 296 troops.

South African President Cyril Ramaphosa on Wednesday confirmed that 1,495 South African soldiers had been deployed to Mozambique. Ramaphosa said this deployment would cost US$66 million.

The conflict has killed over 3000 people and displaced over a million more, according to aid agencies.

The SADC mission in Mozambique will be led by South African Major General Xolani Mankayi, who is in Mozambique as part of an advance deployment.

EXPLAINER: Gas and guns: What’s going on in Mozambique, and should Zimbabwe be worried?

ZW VIEW | Mobile money is not the problem. It’s the cash shortage, stupid