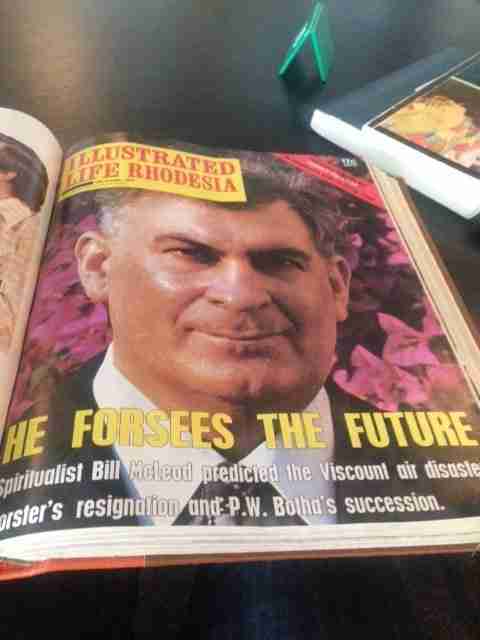 As things get tough, more and more in Zimbabwe are looking to “prophets” to divine the future. It hasn’t always been like this, some say.

Well, not quite true.

Take, for instance, the Rhodesians. In the late 1970s, as the comrades turned up the heat on Ian Smith and the settlers, a lot of Rhodesians did exactly what some of my people are doing today: they found a prophet to tell them it was all going to be okay.

His name was Bill McLeod.

In 1978, his fame grew after he reportedly “predicted” the downing of two Viscount planes by the freedom fighters.

While rummaging through old publications at the National Archives in Harare, I came across an article in the Illustrated Life Rhodesia, a magazine published for local whites and once edited by the late Heidi Holland (author of Dinner with Mugabe). In 1978, they ran a cover on McLeod and how Rhodesians had gone crazy over him.

People pasted pages of his prophecies on windows, and businesses handed them out to customers. His pronouncements were read more than the Bible itself, just like today. These were hard, uncertain times, and McLeod – whose predictions were mostly of a bright, prosperous future – gave hope to his desperate followers. Sound familiar?

This was a seer who, as Holland wrote, was “guided by the spirit of Cecil John Rhodes and a Red Indian called Wise Owl”. In reality, many of his predictions turned out comically wrong.

Here are some of my favourites from him.

He predicted that Bishop Abel Muzorewa would become Prime Minister in the 1980 elections. Many papers gleefully ran this prophecy, which must have warmed the hearts of Robert Mugabe’s enemies, mostly sections of the conservative whites who were scared stiff of “Marxists” coming to power.

Mugabe won that election. You would expect this to have left McLeod’s followers asking questions. But – and here’s yet another way in which McLeod sounds like the prophets of modern-day Zimbabwe – he had an explanation for any big miss to placate believers.

So, according to one account I found, McLeod explained to his followers that he had only predicted that “a small man with spectacles with a name beginning with the letter ‘M’ will become the prime minister of Zimbabwe”, and that “people had jumped on to Muzorewa”.

He also predicted that Edward Kennedy would become US President and that Fidel Castro would be gone by the end of 1981. It did not work out for Ted Kennedy. And, as for Fidel, well, he was to outlive McLeod.

“A very spiritual and simple man will rise and unite Rhodesia. I think he is a white man.” He could only have been talking about himself, no doubt.

A man whose name starts with a ‘G’ would become an important African leader in Rhodesia, he also said.

Nationalist Edson Sithole would “return to Rhodesia” and become “a very important person”, McLeod said. Sithole and his assistant Miriam Mhlanga were abducted from outside the Ambassador Hotel in then Salisbury in 1975. Both were never seen again.

Years later, on the eve of the transition in South Africa, McLeod reemerged to shoot off this gem: “I do not think Mandela as such will rise to the top.” Mandela became President.

“I believe Robert Mugabe has done the best job according to his ability and in time he will be swept away.” Perhaps McLeod can claim that one, however inevitable.

Foreign loans: Court ruling a victory for transparency, but don’t hold your breath