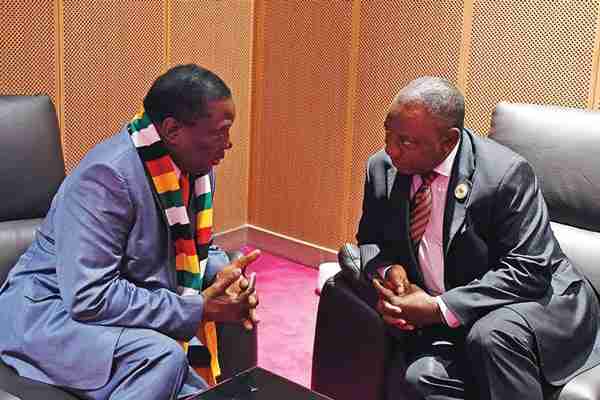 South African President Cyril Ramaphosa is sending two envoys to Zimbabwe, as pressure grows on the region to act on the deteriorating rights situation in the country.

Ramaphosa has appointed Sydney Mufamadi and Baleka Mbete as special envoys, “following recent reports of difficulties that the Republic of Zimbabwe is experiencing”, a statement by his office said.

“The Special Envoys are expected to engage the Government of Zimbabwe and relevant stakeholders to identify possible ways in which South Africa can assist Zimbabwe,” the statement said.

Mufamadi is the former Minister of Provincial and Local Government. He has been involved with Zimbabwe before.

The latest phase of the Zimbabwe crisis will be familiar to Mufamadi; he was a key member of Thabo Mbeki’s mediation team in talks that ultimately led to the GNU.

Mufamadi also sits on the board of Zimplats, which he joined in 2015.

Mbete is the former Deputy President of  South Africa, a former Speaker of the National Assembly and former Chairperson of the African National Congress (ANC).

“The President’s Special Envoys will leave for Zimbabwe as soon as all the arrangements are made,” Ramaphosa’s office said.

Earlier on Thursday, in a series of tweets, South Africa’s International Relations Minister Naledi Pandor said she was in contact with her Zimbabwean counterpart, Sibusiso Moyo, on events in Zimbabwe.

On Tuesday, on the phone, Pandor expressed South Africa’s readiness to assist if requested, her office said.

“Minister Pandor, reiterated South Africa’s commitment to peace and stability in the region and the African Continent.”

The ANC has also said it was concerned by images of security forces abusing citizens.

Losing energy: Perm Sec Magombo on why we’re in the dark, and what her...