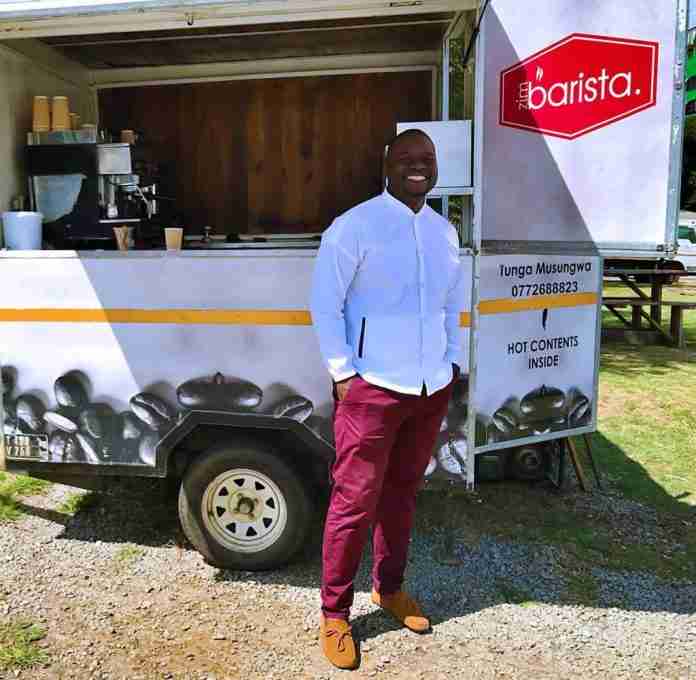 It’s shortly after 8am on a Tuesday, and there’s a constant stream of gym-goers and commuters making their way towards a mobile coffee truck parked at a service station in Rolf Valley, an upmarket suburb in Harare.

The unit’s barista, Simbarashe, greets the customers with a smile and, for some, prompts their orders as they approach the truck. One woman drops off a metal flask, asking that it be filled with her “usual”.

This energy and culture are replicated in nine other locations in Harare, where Zimbarista coffee units operate, a culture instilled by Tungamirai Musungwa, founder and owner of the business.

About two decades ago, life looked a lot different for the entrepreneur, now 43, who then worked a comfortable nine-to-five job as a branch manager for a bank.

But celebrating a colleague’s work anniversary made him rethink his life’s trajectory.

“We had just celebrated one of my colleague’s 35th anniversary with the bank, and at the time, I was about 27. And I thought to myself, ‘wow, how is it he’s been here longer than I have been alive? This could become my life too,” said Musungwa, who had by then worked for the bank for nine years.

That was the moment Musungwa realised he didn’t want a 10-year anniversary at the bank.

Owning a home and a car by the age of 23, Musungwa’s life was certainly nothing to sneer at. And yet he feared that the rat race would swallow him and that one day, he would look back at his life and not have much to show for it.

So he started taking steps to leave the bank.

First, he scouted for business opportunities, looking for a gap in the market that he could fill.

“Twice a month, on a Friday, after work at 4, I would get on a bus to South Africa. I would get there on Saturday morning, go to the shops, be back at the bus stop by about 2pm. By Sunday morning, I’m back in Harare,” he said.

“I would bring baby food, diapers, certain milk for lactose intolerant children, and things like that.”

Before long, Musungwa had accumulated a relatively decent number of people looking for a product on a daily and weekly basis.

But he realised that as the economy improved, the demand for supplies brought over the border would dwindle. It was at this point that he ventured into the construction business — which is how he came to coffee.

While interacting with the owners of a landscape business at one of the construction sites, Musungwa was presented with an opportunity to buy a coffee shop.

“They said, ‘if you know someone looking to buy a coffee shop, we are selling one at the place we operate from’, and I said ‘let me come and see it’.”

In 2009, after a conversation with his wife, Musungwa and his family bought the shop and officially became coffee business owners, despite knowing nothing about coffee.

“I’m in the place of trying things, so I’m not going to know anything if I don’t try anything,” Musungwa said.

“We sold a stand that we had in Chishawasha Hills and bought the place.”

Musungwa ran the business for two years before deciding to take on another challenge, this time in farming. But before he could get going, a group of friends approached him with a different proposal. They wanted to start a coffee shop and were looking for someone with knowledge of running a coffee shop to partner with.

“In my mind, I was, like, ‘coffee again?’ At the same time, I thought, ‘I’m coming out of this situation, so I guess I could just help them in the meantime’,” he said.

Musungwa was asked to attend an on-the-job training with the Seattle Coffee Company in Johannesburg. There, he experienced another life-defining moment.

“I got into Hyde Park Seattle, one of their bigger branches, and my mind was blown,” Musungwa recalls.

“There were long queues of people, and the coffee had to be done fast — in the shortest time possible. They are paying top dollar for it; I saw latte art being drawn with milk, freehand, and I thought to myself, ‘I don’t know what I was doing for the last two years’. It was a total mind shift,” he said.

In 2010, Musungwa returned to Zimbabwe with his newfound knowledge and co-founded a coffee business, Freshly Ground, determined to do things differently.

“We did extremely well, and the business grew; we ended up opening one or two other outlets. I managed Freshly Ground for about four and a half years before I finally left.”

Musungwa was up for the next challenge, now confident that he was onto something with coffee.

“There had already been things on the horizon that I had begun to see. Things like the emergence of international brands coming in,” Musungwa said.

He said people are leaning more toward convenience in a world where people order online and things arrive at their doorstep.

“How about we make the coffee more mobile, rather than waiting for people to come to us? How about finding out where people are already meeting and interacting — and occupying those spaces?”

To answer these questions, Musungwa founded Zimbarista, a mobile coffee business serving teas and a variety of espresso-based coffees, 90% of which are cappuccinos and lattes, and quickly identified schools as a market where parents and guardians gather when they drop off children, as well as at corporate events. The business started to grow.

“Slowly but surely, we began to open more and more outlets.”

At its peak, Zimbarista had up to 12 outlets and a vintage shop in a VW minibus.

“The bus was brilliant because of its vintage feel; it lends itself to many weddings. It’s got a whimsical sort of feel to it,” Musungwa said.

But, because of the Covid-19 pandemic, Musungwa had to cut down to 10 outlets, with four operating as mobile units and the rest as fixed outlets serving coffee within another business.

Training has also become a big part of the work of Zimbarista, with the company hosting monthly barista training sessions.

“We offer various training programmes from entry level barista training to those who want to operate more out of a coffee shop, and that includes putting them in the units we operate for hands-on experience.”

Musungwa has now trained about 53 baristas, including Janie Duffy, a customer who took the course to enhance her own business.

“The best part of the course was practising the process of making coffee — from grinding the beans, calibrating the coffee machine, creating the right temperature and texture of milk to pouring a pattern on top of the coffee,” said Duffy.

“I’m confident to serve a good coffee and supervise and monitor my baristas at Ultimate Fun, the popular family activity centre in Eastlea [a suburb in Harare].”

In the future, Musungwa hopes to include more training sessions, open Zimbarista branches across Zimbabwe and roast and sell his own coffee beans.

“I love talking about coffee, I love teaching it, and I love seeing people go from not knowing and understanding to now making it, doing it themselves in the same way I was trained at Seattle,” Musungwa said.
“I love to see people get it, and suddenly they are soaring with it, and now they’ve found something they can go ‘hey, that’s a passion for me’.”

OPINION | Imara: Inflation is on the march again, and, like before, it’s about...