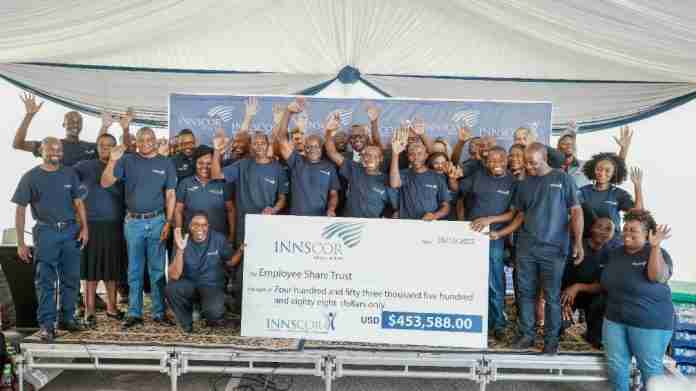 Innscor Africa Limited has paid out close to half a million US dollars to workers, saying this was a sign of growth in profitability.

Chairman Addington Chinake handed out a cheque of US$453,588 to the Innscor Africa Employee Share Trust on Monday, part of Innscor’s first USD dividend since the return of the multi-currency system.

“Significantly the Trust dividend payouts have grown as the company’s profitability has risen. Since 2015, the Trust has paid out an estimated US$3 million in dividends. This amount has steadily risen to a record US$543,588 in this financial year ended June 2022. This represents an increase of 189% on the 2019 dividend which was US$ 236 000,” he said.

“The company has a dividend yield of 4% which confirms that our business is on a healthy trajectory. It is my pleasure to present our first USD dividend payout since the reintroduction of the multi-currency in 2019.”

The Innscor Africa Employee Share Trust private limited launched in 2014 with seed capital of US$100,000, which has now grown to close to US$1 million. The fund is used as a credit pool for workers. At launch, the company agreed to fund the Trust over 10 years via an ex gratia dividend of a maximum of 5% of the dividend due to ordinary Innscor shareholders.

Innscor declared a final dividend of US$1.56 cents per share for the financial year to June this year.

After spending US$70 million on new investments last year, Innscor is spending a further US$56 million for the coming year on new projects. This capex includes an investment of US$30 million at National Foods, which will see new projects; a new breakfast cereal plant in Harare, a flour mill in Bulawayo to be commissioned in March, pasta and biscuit plants in Harare due in 2023, and the expansion of the Aspindale rice packing facility next year.