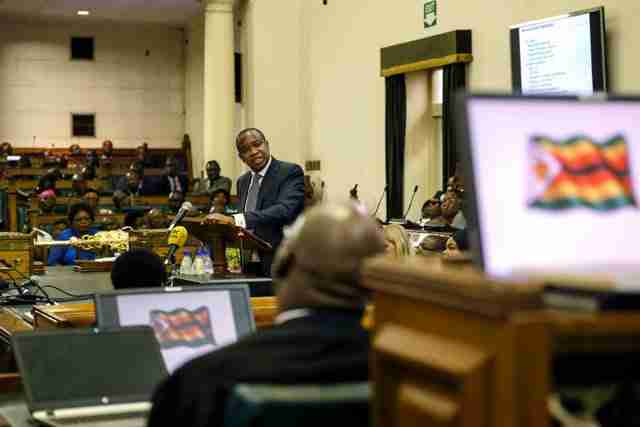 Finance Minister Mthuli Ncube played it safe in his mid-term budget review statement on Thursday, making no major policy decisions and saying he may not need additional funding for his 2021 budget.

After many previous policy shocks, the best part about a largely uneventful budget statement was exactly that; it was uneventful. There were no major announcements on taxation, the currency, or any measures likely to shake tables immediately.

“There is need to stay the course. There are no policy changes; I believe the existing policies are achieving the desired results are still adequate,” Ncube said. If any big budget changes are to made, those would come in the 2022 budget, he said.

Here is a summary of some of the main takeaways from Ncube’s statement:

Ncube’s prediction of 7.4% growth for 2021 was already ambitious, so much that even President Emmerson Mnangagwa thought it must be revised downwards. But Ncube is even more confident. He now sees the economy growing by 7.8%, higher than his initial expectation of 7.4%.

His predictions are far higher than the IMF’s projection of 6% and the World Bank’s 3.9% forecast. They also contrast sentiment from major local companies, many of which are tempering their confidence of a rebound with caution over the likely impact of COVID-19.

Ncube says agriculture will this year grow faster than expected. It will grow by 34%, higher than the initially predicted 11%. He bases this on output from key farm segments, such as maize production.

The finance minister is also counting on the base effect of GDP contraction in 2020, when the economy shrank by 4%. For 2022, Ncube expects the economy to expand by 5.4%

Ncube said COVID-19 vaccines that have been bought so far have been purchased “utilising the savings from last year, in the main.”

But, to achieve Zimbabwe’s target of 60% of the population, the vaccination campaign will require “mobilisation of additional resources for the procurement of more vaccines, over and above the US$100m resource envelope.”

Ncube laid out what he has spent so far on the programme. To date, 11.8m doses and 7.2m syringes have been purchased using US$93.2 million.

No extra budget needed, for now

Ncube has stayed away from asking for more money from Parliament. Unless there is a major shock, he says, there will be no need for a supplementary budget this year.

He said: “In the outlook to December 2021, expenditure target of ZWL$421.6 billion will be maintained assuming continued containment of expenditures, save for exigencies managed through reallocations, where necessary.”

So far this year, the Government has managed to live within its means. The government raised an estimated Z$198.2 billion in revenues between January and June and spent Z$197.6 billion.

During the first six months of the year, Zimbabweans living abroad sent home a total of US$746.9 million. Over the same time last year, they sent US$288.7 million. Remittances are projected to reach US$1.3 billion by year end, Ncube said.

The contribution of Diaspora remittances to the economy is growing.

“Diaspora remittances and other transfers, which constitute the secondary income account, are projected to continue driving the current account balance as was the case in 2020. Personal transfers from Zimbabweans in the Diaspora are expected to remain steady and resilient as the economies in key source markets recover from the Covid-19 induced slow-down, allowing them invest in assets back home.”

In December, Ncube announced that the government was privatising Fidelity Printers and Refineries. This is the company that refines and exports gold. Gold producers would control 60% of Fidelity, with central bank keeping 40%.

Ncube has now announced that this deal is now done. Ten miners have agreed to buy the 60% for US$49 million. This will be the first time that the refinery will be in private hands since it was established in 1988.

While Ncube did not name the ten miners, a structure announced last year said participation would be based on average gold sales over the previous three years. This means among the potential will be the biggest gold producers, such as Kuvimba’s Freda Rebecca, which is now the number one producer, as well as Caledonia Mining, which runs Blanket, and RioZim.