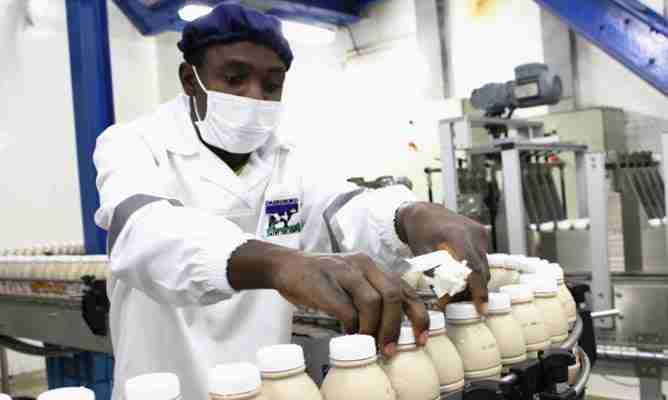 Dairibord, the country’s biggest dairy producer, has reported a 12.5% drop in sales for 2020 due to COVID-19 restrictions and lower output from milk producers.

In 2020, farmers produced less milk, as they felt the impact of high costs of stock feed, the outcome of drought.

“Raw milk intake declined by 6% largely caused by reduced yields at dairy farms due to stock feed price increases. The country experienced a shortage of stock feeds because of the droughts in preceding years,” Dairibord says in its latest annual financials to December.

According to the Stockfeed Manufacturers Association of Zimbabwe, which includes major players Natfoods and Profeeds, the average cost of raw materials in 2020 went up by 886%, compared to 2019.

ALSO READ: Explained – Why milk is in short supply

Dairibord’s sales volumes were 12.5% lower than 2019, weighed down mostly by the second quarter, during which volumes went down 46%. The second quarter came immediately after the first hard lockdown was imposed on the country towards the end of March. Those measures impacted trading hours at retail outlets and disrupted supply chains.

“While there was a recovery in sales in the second half, supply chain constraints limited the business’ ability to fully capitalise on demand,” says Dairibord.

Liquid milks fell 9% due to the fall in raw milk intake and disruptions of imports caused by border closures. There beverages category fell 18%. In the foods category, which delivers the highest margins and volumes for Dairibord, sales volumes were 9% better than in 2019.

“The second half of the year saw relaxation of operating restrictions, increased economic activity and rebounding consumer demand. The introduction of the foreign currency auction system on 23 June 2020 bolstered price stability and positively impacted on industry’s ability to secure inputs,” Dairibord says.

The company says other positive developments in the year included improved fuel and power supply, although these were more expensive. The year also saw suppliers taking longer to deliver goods across the supply chains, as well as higher labour and utility costs.

Dairibord, however, issued an upbeat forecast for the year. The company sees recovery due to the vaccination rollout, the currency auction, as well as the improved farming season which it says will “increase agricultural output, resulting in improved supplies into out value chain” and cause “an increase in aggregate demand”.

The company accounts for 39.1% of national raw milk intake. It is currently in talks to merge with Dendairy, the number two producer.

A final dividend of Z$23 cents per share has been declared.