In the first installment of a regular series for newZWire, “THE ELEPHANT IN THE ROOM”, Milayo Ndou argues that a woman’s reputation is fragile, and being a public figure only makes her an easy target. Towards 2023, she writes, there will be many incidents of gendered defamation

In an interview where he defended himself against allegations levelled against him by George Charamba that he had sold out the Counselling Services Unit (CSU) following the 1 August 2018 shooting of civilians, Hopewell Chin’ono appeared to adopt an ‘open book’ strategy, creating the impression of one who has nothing to hide.

This ‘open book’ strategy included name-dropping diplomats, divulging names of ZANU PF political actors he interacted with, including details regarding what, when, where, who, why and how various interactions came to be. It was a convincing display of deliberate oversharing and it met the threshold of authenticity, as self-disclosures tend to do.

The only area of vagueness throughout the interview was when Hopewell was prompted (or instigated?) to comment on activist Thandekile Moyo, who the interviewers goadingly framed as one of his critics. After making a few comments, Hopewell’s erstwhile open-access narrative gave way to a tactical ambiguity. The oversharing tone was abruptly replaced with a purposeful withholding, which one might mistake for the kind of chivalry that doesn’t permit a gentleman to kiss and tell.

Yet, the self-serving and virtue-signalling manner of Hopewell’s withholding is hard to miss and impossible to mistake when one understands the potency of insinuation.

For a man unwilling to say a lot, Hopewell managed to have said just enough. Sometimes reputational damage is done by withholding pertinent facts and leaving statements open to nefarious interpretation. Insinuation can be a deceptively innocuous but devastatingly effective way of imperilling someone’s reputation, and by extension, smearing them.

Thandekile has asserted that Hopewell’s insinuation that there was something more that happened between them that he doesn’t want to divulge is abusive. She has a point, because the insinuation harms her in ways it does not, and cannot, harm him.

It is also abusive because Hopewell’s formidable influence, combined with the influence of the publication that he favoured with that interview, amplifies the insinuation. Whilst Thandekile has influence too and a community that would close ranks around her, there is no denying which of the two wields more power. Perhaps Hopewell is counting on that. He can afford to forever hold his peace on this particular matter because the misogynistic nature of the audiences he was addressing understand the coded language he used. It is a form of malign creativity, the use of coded language to enforce gendered defamation online.

As we head towards 2023, and indeed find ourselves in the eye of the campaign storm that has ensued (possibly fuelled by the outcome of the Zambia election), there will be more incidents of such gendered defamation. But that is not the frightening thing. The frightening thing is that there will also be more of the loud silences from people who have the platform to speak against this kind of behaviour.

What was equally infuriating about the manner in which some social media users responded to the issue was the insistence that Thandekile address the matter in private so as to protect the integrity of the pro-democracy cause. Chiding Thandekile in this manner implied that the actions of Hopewell and those of Thandekile weighed the same, hence in condemning the disclosures, it appeared as if the actions of the pair had to be measured on an equal scale of culpability.

As Lucina Di Meco and Saskia Brechenmacher have noted: online abuse and sexist narratives targeting politically active women are not just the product of everyday misogyny: they are reinforced by political actors and deployed as a political strategy. In defending himself, Hopewell deployed gendered defamation as a strategy. He did so in a very calculated and cunning manner.

Anyone who successfully makes a living through storytelling understands the potency of insinuation, and its potential to incite salacious speculation – and by extension, to invite abuse as well as defamation.

Identifying the problem is not enough. It is important to speak out against it and to raise the reputational costs for those who engage in this kind of gendered defamatory conduct.  The political participation of women can be thwarted from many quarters, for instance through enforcing a political order that silences women and seeks to actively humiliate them. Gendered defamation is oppressive and unfair to women.

It should be the duty of any pro-democracy loving person to fight as robustly for women’s personal freedoms as they do for national political ones – especially when silence is more convenient.

Milayo Ndou is a feminist thinker and media scholar pursuing research on Violence Against Women in Elections (VAWIE).

She has a keen interest in tracing how gendered repression manifests and the ways in which it constricts women’s effective political participation. Twitter handle: @MilayoNdou 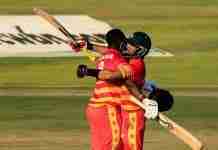