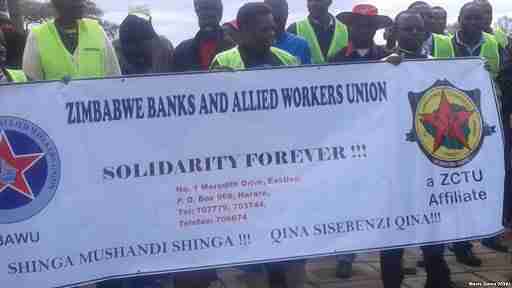 The Zimbabwe Banks and Allied Workers Union (Zibawu), the sole union for the financial services sector, says it has rejected a wage increase of about 350% tabled by employers during ongoing negotiations.

According to Zibawu, the minimum wage in the sector is currently Z$5,800 per month. The proposed increase would see the least paid worker grossing Z$26,000, according to the union.

“From where we stand, this is clearly an insult to us. Z$26,000 gross is nothing because, if you look at our costs, they are denominated in US dollars,” Zibawu president Tawanda Mutemi said in a Facebook interview. “Our demands are very clear, we want to be paid in US dollars, because the economy is clearly dollarising.”

Wage negotiations for the financial sector are guided by annual inflation and the Bank Employers Association of Zimbabwe’s offer is in line with the year-end inflation figure of 348.59%. Zibawu says the inflation guidance must be disregarded and has raised the spectre of strikes should banks refuse to budge.

“Employers want to stick to the inflation clause, the annual inflation clause, which is no longer relevant in this hyperinflationary environment. It’s not going to be easy, and they (workers) may be required to flex their muscles so that we come up with something better,” Mutemi said.

The latest available central bank report on the sector, for the quarter ended September 2020, described banks as resilient despite shocks associated with COVID-19.

All banking institutions were profitable during the quarter, with combined profits for the sector at Z$23.37 billion, according to the report.

But the banking industry has been going through some turmoil amid high inflation, a lengthy bank note shortage and, lately, COVID-19. The industry has shed nearly 500 jobs since 2018 and as many as 17% of out of 300 branches have been closed as banks increase their use of digital platforms, a Zibawu official told Bloomberg recently.

OPINION | ‘We’ve put land matter behind us, we ask others to do the...