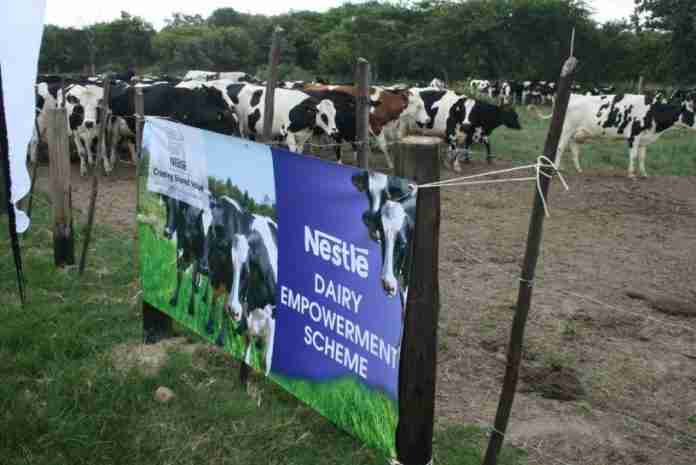 At Nestlé Zimbabwe, the factory has capacity to produce 45 million litres of milk per year. But there just isn’t enough milk to push the factory to capacity, a result of the drop in milk production that started years ago.

Now, a project at Malwatte farm near Marondera shows how Nestlé, one of the country’s biggest food processors, has been working to change that.

Under its Agriprenuership project, Nestlé Zimbabwe is steadily increasing national milk production while accelerating the development of capable and willing farmers to grow their farming skills, arming them with the business management they need to grow their farms.

“We helped the network by importing 100 in calf dairy cows, which were subsequently dispersed to small-scale farmers (70 cows) and the anchor farmer (30 cows).”

At peak, Zimbabwe produced 260 million litres in 1990, when the country had close to 120,000 dairy cows. Last year, the dairy herd stood at 39 980, according to the Ministry of Agriculture, showing the gap that the industry is now working to fill.

In 2011,  the Nestle Dairy Empowerment Scheme (NDES) was launched. Under the programme, the company has distributed almost 500 dairy cows through imports and local sourcing.  Gomes said that the concept has grown steadily to feed in the national drive to meet the country’s milk demands through local production.

Zimbabwe had an annual milk demand of over 180 million kg and in 2012 could only produce 52 million kg. Nestlé Zimbabwe moved in to fill that gap through NDES, by investing in the farmers that produce the milk needed to feed its Harare factory.

After the success of Chitomborwizi, Nestlé Zimbabwe built two more farmer networks using the hub and spoke model: Watershed in Hwedza in 2019 and Agroprosperity in 2020. This was despite the disruption caused by COVID-19 at the time.

More than 80 independent small-scale farmers work in these three small-scale centres, he says.

Nestlé Zimbabwe’ has been in the country for over 60 years enhancing the quality of life and contributing to healthier future for the communities. Commercial farmers are the hubs of collection and supply in ramped up through linkages with small scale farmers in the area.

“NDES began with commercial farmers and expanded to include small-scale farmers in 2015. Small scale farmer development has been accomplished using a hub and spoke strategy in which we anchor small scale farmers/out growers around an anchor farmer where we create a milk collecting facility,” said Gomes.

“Via NDES, we focus on rural development since the well-being of farmers and rural communities is critical to the long-term success of our company and society,” Gomes says.

“We focus on water, in addition to nutrition, since water shortage is a severe concern in many parts of the world worsened by the onset of climate change across the globe, and water is simply the cornerstone of food security,” according to Gomes.

The improved Nestlé milk results are however, still not enough to utilize the Nestle Harare factory capacity to process 45 million litres of milk per year. Therefore, the company continues to focus on to reinforcing existing farmer developmental programs and structure expansion programs to strengthen delivery chains through their Market Dairy Strategy.