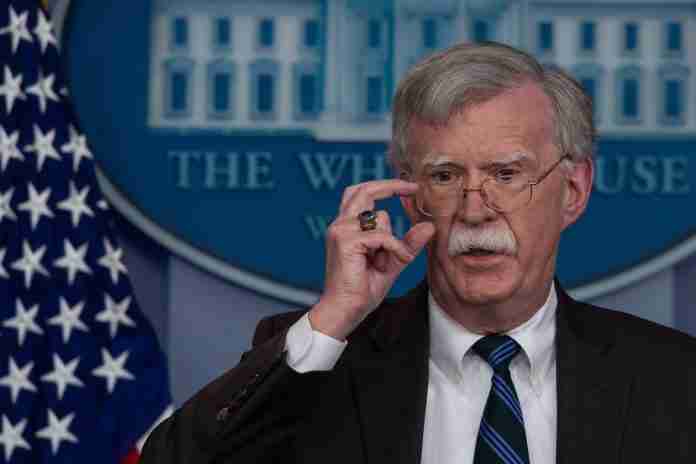 Donald Trump’s administration on Thursday announced its new strategy for Africa, which greatly cuts aid to the continent and places tougher conditions on financial and military support, as a way of countering the growing influence of China and Russia in Africa.

The new policy strips out all the diplomacy of previous years and lays it out bare; The US will now only spend money in Africa when it suits America’s national interests.

In real terms, the new strategy is more a move against foes China and Russia, and shows how lowly Africa ranks on Trump’s priority list.

“Under our new approach, every decision we make, every policy we pursue, and every dollar of aid we spend will further U.S. priorities in the region,” US national security advisor John Bolton announced at a press conference.

There would no longer be funding to “corrupt autocrats, who use the money to fill their coffers at the expense of their people”.

In its fight with China and Russia, Africa is caught right in the middle – and Zimbabwe is not spared.

So, how will the new US policy on Africa, which Trump has called “Prosper Africa”, likely to affect Zimbabwe?

US aid: You’re with us, or against us
Each year, the US spends $250 million on aid to Zimbabwe, used in various areas such as health, food security and human rights.

According to Bolton, under the new policy, “countries that repeatedly vote against the United States in international forums, or take action counter to US interests, should not receive generous American foreign aid.”

This means that countries that vote against US wishes at the UN will suffer aid cuts.

For Zimbabwe, this is a big deal. Here is why;

This, obviously, means that Zimbabwe will be top on Trump’s list of countries that will not get his money for voting against the US.

The 10 countries that voted with the US the least are Zimbabwe, Burundi, Iran, Syria, Venezuela, North Korea, Turkmenistan, Cuba, Bolivia and South Africa.

Debt clearance and loans
As if ZIDERA and the sanctions executive order barring US lending to Zimbabwe were not enough, the new policy will make it even harder for Zimbabwe to either get new credit or to win the debt relief that it desperately needs.

Under the new US policy, America will not lend to countries that receive money and investments from China or Russia.

On this, Trump is responding to pressure in Washington to respond more firmly to China and Russia.

In August, Republican Senator David Perdue led a bipartisan group of 15 senators demanding that the US rejects any bailout requests to the International Monetary Fund (IMF) from countries who have accepted what they called “predatory Chinese infrastructure financing”. In the new policy just announced, Bolton uses similar language, also describing Chinese funding in Africa as “predatory”.

In a letter to Treasury Secretary Steven Mnuchin and Secretary of State Mike Pompeo, the senators said Trump must respond to the Belt and Road Initiative (BRI), China’s expansive infrastructure funding initiative to which it devoted $60 billion at the China-Summit in September.

Zimbabwe is also seeking some Chinese credit under BRI to fund its $30 billion infrastructure gap, although this has been tough given that Zimbabwe owes $160 million to China Eximbank and Sinosure.

To get new funding from the IMF and other Western financiers, Zimbabwe needs to simultaneously clear all its arrears to all lenders. Finance Minister Mthuli Ncube has been lobbying to have this requirement waived, so that it can stagger payments among creditors. At a meeting in Bali, in October, Ncube said his debt clearance plan was back on track after talks with lenders.

However, at that meeting, US Deputy Assistant Secretary of Treasury, Erick Meyer, remained sceptical and invited Ncube to Washington for further talks. Without US support, a key shareholder in lenders such as the IMF, the debt plan would struggle.

With the new stance in the US – which will be targeted more at individual countries and not regions – Zimbabwe, and the rest of Africa, will now be at the mercy of a variety of lobbyists.

You can’t be China’s china
Under the new US policy, the US is telling African countries to choose either to go with America, or with China and Russia.

“We will encourage African leaders to choose high-quality, transparent, inclusive, and sustainable foreign investment projects, including those from the United States,” Bolton said.

In April, on a visit to Beijing, President Emmerson Mnangagwa convinced China to resume a stalled $1.5 billion Sinohydro deal to install two new units at Hwange, which will each generate 300MW. This will raise Hwange’s installed capacity to 1 520MW from 920MW. Civil works have already started on site.

Zimbabwe is however talking with America’s General Electric Africa for a possible partnership with Power China to build the long-delayed 2200MW Batoka power project.

Other recent China deals include a $153 million loan to expand Zimbabwe’s main airport, which follows China’s $150 million upgrade of the Victoria Falls airport, completed in 2016.

Zimbabwe’s old alliance with Russia would also come under scrutiny with the new US policy.

A consortium of Russian and Zimbabwean investors, Great Dyke Investments, is developing a $400 million platinum project in Darwendale, near Harare. The project had stalled under former president Robert Mugabe, but was revived when Russian foreign minister Sergey Lavrov visited Zimbabwe in March.

Alrosa, the Russian diamond company that is the world’s largest producer of the gem, is also seeking investment in Zimbabwe. The company’s CEO, Sergey Ivanov, flew to Harare in April to meet Mnangagwa.

The NGO industry
While much focus will be on America’s attitude to the Zimbabwe government, Trump’s new stance could also see aid cuts to the dozens of human rights groups that have lived off US funding for years.

There was a taste of this on the eve of elections, when USAid cut funding to ZimRights, the Election Resource Center and the Counseling Services Unit, citing “the possible misuse of U.S. assistance funding”. According to Bolton, the focus now will be on “ensuring that U.S. taxpayer dollars for aid are used efficiently and effectively”.

Bolton reveals US frustration at the ineffectiveness of its donor spending, saying “billions upon billions of US taxpayer dollars have not achieved the desired effects”. No longer would the US “provide indiscriminate assistance across the entire continent, without focus or prioritization”.

ZW VIEW | ‘Chibabest’ Chasi cannot solve the energy crisis, but he must communicate...

ANALYSIS | Tinkermen: How RBZ, Govt sabotaged their own plan to restore the Zimdollar

FEATURE | How one woman’s backyard hydro farm is beating drought...

OPINION | How the Zimdollar has been a disaster for asset...